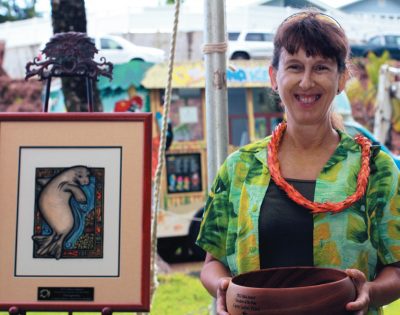 Caren Loebel-Fried is an award-winning author and artist from Volcano, Hawai’i. Birds, conservation, and the natural world are the foundations for her work. Caren has created many storybooks, including Hawaiian Legends of the Guardian Spirits and Lono and the Magical Land Beneath the Sea, which use the ancient art of block printing, taught to her by her mother. Caren’s books have been recipients of the American Folklore Society’s Aesop Prize for Children’s Folklore and the Hawai’i Book Publishers Association’s Ka Palapala Po’okela Awards.

In addition to books, Caren creates iconic, educational art for local and national conservation organizations and government agencies, including the United States Fish & Wildlife Service, Midway Atoll National Wildlife Refuge, Kilauea Point Natural History Association, and Conservation Council for Hawai’i in the Hawaiian rainforest, she lives among several native bird species, but lately seabirds have captured her imagination. Caren spent five weeks on Midway Atoll counting and researching albatrosses, and has been visiting other locations where new work is being done to help seabirds. Caren’s aim is to bring people, especially children, closer to the natural world with the hope that they will want to help care for it.